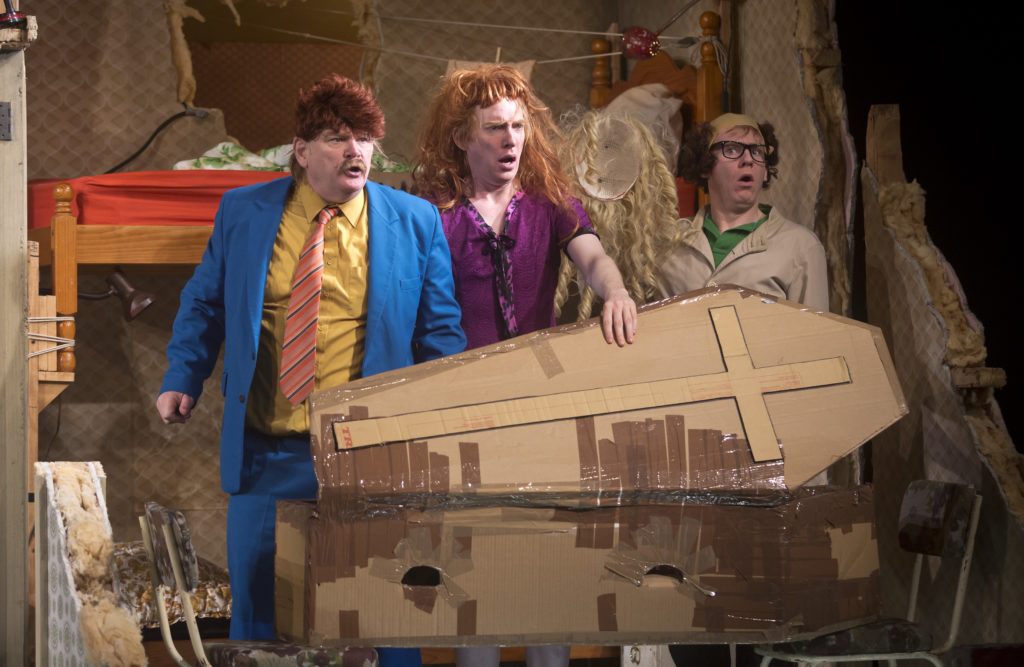 Gleeson family values put to the test in this fantastical farce

In Enda Walsh’s turbo-charged tragicomedy, an Irish family are horribly condemned to live out their lives in endless performances. Any similarity to the Gleeson family is entirely coincidental

Among all the surreal horrors of Enda Walsh’s turbo-charged tragicomedy from 2006 – a play in which a freak speedboat accident means that two people can be killed, quite conceivably, by the same flying horse – there is none quite as riveting as this: one Irish family are horribly condemned to live out their lives in endless performances.

These men are Dinny, a tyrannical and overbearing actor, whose two benighted sons, Blake and Sean, have followed in his footsteps and now grow resentful of his shadow. In Landmark’s sensational new production they are played by Brendan, Domhnall and Brian Gleeson.

The Walworth Farce was already pretty “meta” before it met the Gleesons. Dinny, an exiled Cork man holed up in a dilapidated flat in South London, has been staging a splenetic and crude farce about how he got there. As memories of the grubby truth fade, his two sons assist with the ruse, fetching props, assisting with stage management, and performing every supporting role for an audience of nobody. It’s as if repetition alone will finally make Dinny’s mangled version of events real. But, after 18 years of performance, cracks in the tale have become chasms. When a stranger from the outside world intrudes, a Tesco’s checkout girl called Hayley (an over-ebullient Leona Allen), a chance arrives to either escape, or be subsumed into, an awful fate: spending eternity in an Enda Walsh play.

For all its madcappery, the play is a work of meticulous, revealing detail. Director Sean Foley amplifies the scabrous comedy of an Ireland in exile, gleefully mocking everything from mammies to money, sentimentality to storytelling. The scenes are crammed with some inspired visual gags and choreographed with outrageous physical gags, but just as much work has gone into tracing a real-world logic behind the madness. Alice Power’s breakaway set is neurotically, thoughtfully detailed, where even the addition of an unnecessary wheelchair embroiders Dinny’s duplicitous character, while Paul Keogan’s lights, giving a performance of their own, underscore the modes of delivery: a brash glow for the farce, pallid fluorescence for reality.

With such thorough attention, it’s a pity to find compromises: comfy new runners instead of Dinny’s brown boots, or text adjustments following Brian’s decision not to shave his head. For his part, Domhnall, who plays all the farce’s female roles, has decided to shave his everything.

That display is oddly significant, because acting in The Walworth Farce is a heated competition; Dinny even awards a trophy, always to himself. To see Domhnall whirl between seven parts and negotiate different levels of reality, performing a spontaneous duet with an exploding beer can, casually tucking his ankle behind his ear, and still slipping, somehow, into exquisite moments of tenderness with his younger brother (a nicely contained Brian), is to see an actor giving his absolute all.

Ironically, that is the tragedy of Walsh’s comic play, the exhausting, depleting consequence of living a lie. “What are we if we’re not our stories?” asks Dinny; the same question has haunted Irish writers from Synge to Murphy. If the Gleesons just wanted to stage a family reunion they could have chosen something less demanding, like A Long Day’s Journey Into Night. Instead, this feels like The Walworth Farce’s induction into the canon, an impossible and inescapable performance of identity and fantasy, the real story, perhaps, of who we are.